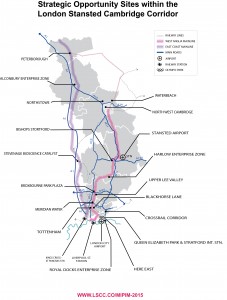 As part of London, and with a successful tech-based economy in its own right, the London – Stansted – Cambridge Corridor could achieve significant international success over the next thirty years – but there is a need to articulate how this will happen. The LSCC Growth Commission will work to ensure that public and private sector leaders and understand the potential of the Corridor, and there is agreement on the key collaborations and actions needed to realise this.

Established as an independent initiative by the London Stansted Cambridge Consortium, the LSCC Growth Commission aimed to provide independent analysis and advice to raise the global economic potential of the London-Stansted-Cambridge Corridor and make recommendations on how to achieve transformational change.

The Growth Commission was announced on the 16th of June, 2015 at the London Stansted Cambridge Consortium Annual Conference at the British Library in London. With a research programme and a series of inquiry events running from October 2015 to May 2016, the Growth Commission will make its final recommendations in June 2016.

Click on the links for further details on the terms of reference and who the Growth Commissioners are.