The leading philanthropist and senior businessman, Harvey McGrath has today been appointed to chair an independent Growth Commission established to build the ambitions and actions needed to strengthen the London– Stansted – Cambridge Corridor as a world-leading area economy.

With its £161 billion economy the London –Stansted-Cambridge Corridor has outperformed the national economy over recent years. Linking the world’s leading university and its high tech cluster with the world’s leading city with its cosmopolitan growth and a diverse, globalised business base – the Corridor is poised for significant growth.

Harvey McGrath, commented upon agreeing to Chair the Growth Commission:

As part of London, and with a successful tech-based economy in its own right, the London – Stansted – Cambridge Corridor could achieve significant international success over the next thirty years – but we need to articulate how this will happen. I will be working with the other Growth Commissioners to ensure that public and private sector leaders and investors are left in no doubt of its enormous potential, and there is agreement on the key collaborations and actions needed to realise this.

Harvey McGrath has had a long and distinguished career in the international financial services industry, and is the former chair of Prudential plc, the London Development Agency, London First and Man Group plc. He is also Deputy-chair of the Mayor of London’s London Enterprise Panel (LEP), the local enterprise partnership for the capital.

The Growth Commission has been established by the Board of The London Stansted Cambridge Consortium (LSCC) – a partnership of public and private organisations based along the fast-growing economic corridor between London and Cambridge. A world leader in high tech and bioscience, the corridor accounts for 20% of England’s digital economy and life science workers. Investment in transport connections along the corridor will mean more high-tech businesses and jobs which are a driver of growth and the key to the UK’s future prosperity.

The Commission will also draw upon the expertise of highly regarded experts including internationally renowned economist, Professor Michael Enright, to strengthen the case for investment to support smart, high quality growth playing a significant role in the UK’s future economy. Professor Enright has consulted extensively on business strategy, regional economic competitiveness, and economic development and is known as “one of the world’s reigning strategy gurus”.

Evidence sessions will commence in January, following a period of research and there will be a call for written evidence in the New Year. The commission will launch their findings and recommendations in June 2016. 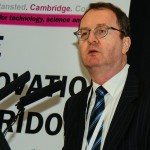 “The London-Stansted-Cambridge Corridor is one of the key high growth opportunity areas for the UK and I am delighted to be working with the commission. With a vision and plan to invest in a high quality business location capable of attracting global talent, the corridor will be poised to become a pre-eminent regional economy – both nationally and internationally.”