The report (available in full here, and as an executive summary) makes the case for unleashing the potential of one of the UK’s major economic regions, the “London-Stansted-Cambridge Corridor.”  It outlines a 20-year vision for the Corridor that would see it become one of the top “knowledge regions” in the world, competing alongside Silicon Valley, Boston’s high-tech / life science cluster, Greater Munich, Øresund in Scandinavia, and emerging regions in Asia.

The Corridor’s GVA has grown 6.1% since the recession compared with the UK average of 3.7% and its productivity is 16% higher than the national average. It is also host to some of the country’s fastest growing towns and cities, from Peterborough to Hackney, accounting for 10% of England’s population growth.

While the corridor’s growth rate is higher than all other regions across the UK, the LSCC’s Growth Commission, chaired by Sir Harvey McGrath, warns in its report that comparable zones around the world are now outpacing it.

The Commission has identified the following issues which need to be addressed:

Following these steps would help the London-Stansted-Cambridge Corridor at least match emerging regions from Asia on technological capability and, crucially, would enable the area to out-compete them on quality of business location, quality of life, and the depth of collaboration between firms, research institutes, entrepreneurs, higher education and government.

“This report shows that if we have the ambition and the willingness to act collaboratively we can build a truly world leading economy.  We identify the main challenges hindering business investment: the lack of workforce skills, housing and transport capacity.  We are not asking for grants from Government, but the freedoms and flexibilities to utilitise private investment and global capital to reach our goals.”

“The EU referendum result offers huge opportunities despite near-term uncertainties. The global opportunities for this region are considerable but there is an urgent need to upgrade the transport infrastructure and build more affordable housing. With a Global Brexit solution we can strengthen access to high skilled talent and finance, provide more employment and build our high-knowledge economy. This region is well placed to help rebalance the UK economy and play an ever stronger global role.”

“The Corridor is already one of the most attractive locations in the UK for global investment in knowledge-based industries but it could be so much more successful, with benefits for the UK economy as a whole. Being able to capture the benefits of growth would support public and private investment in the infrastructure needed to ensure high-quality, high-value growth in the years ahead.”

“Public Health England is committed to a 8 year, £400m capital investment in Harlow. The Hub will create a centre of excellence for research, health improvement and protection and bring together world-renowned scientists working to protect and improve the health of the nation.  Harlow puts us at the heart of a globally important life science cluster. As the Growth Commission sets out we need to ensure investment in effective transport links and affordable housing to support the on-going success of this region.”

“We’re delighted that the independent Growth Commission has recognised the pivotal role Stansted plays as an economic driver at the heart of the  corridor and its potential to deliver the aviation capacity and growth opportunities needed to fuel the burgeoning hi-tech and life science hubs.

Yet, if we are to realise the full potential of the airport and the corridor, we need to be serious about investing in our transport infrastructure to help business connect to the global marketplace, equipping our young people with the skills of tomorrow and working collaboratively to boost economic growth and development.

Under MAG we have ambitious plans for Stansted, it’s encouraging to see our ambitions are matched by the Commission’s vision to create a truly world leading economy, that not only rivals but beats the likes of Silicon Valley and Boston Route 28.  In uncertain economic times, we urge Government to back a winner and champion the strength of the UK’s only knowledge and innovation corridor.”

Download the full report here, or the stand-alone executive summary. 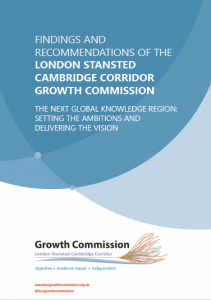 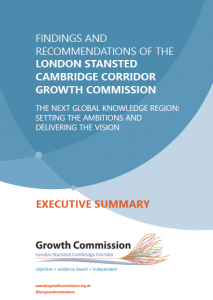