The London Stansted Cambridge Corridor has significant labour market flows and is a travel-to-work area, and is the heart of the UK’s Life Sciences and IT & Digital industries. Improving the economic links and connectivity within and surrounding the Corridor are vital to future UK economic performance.

While the corridor’s growth is outpacing all other regions across the UK, with its GVA growing 6.1% since the recession compared with the UK average of 3.7%, the Growth Commission’s evidence concludes that comparable zones around the world are outpacing it, because they have better coordinated strategies for ‘smart growth’, particularly in housing and transport. The Corridor’s competition is not with other parts of the UK but with other growth areas globally, such as Silicon Valley and Greater Munich.

COMMUTING FLOWS IN THE LSCC CORRIDOR

Our research shows, based on the latest census data that the travel to work patterns are predominantly localised around major employment hubs such as Cambridge, or run along the strong and dominate north-south transport corridors, such as the M11, A10, West Anglia and Great Northern routes.  Based on ONS’s official data Cambridge’s travel to work pattern now extends to Harlow. 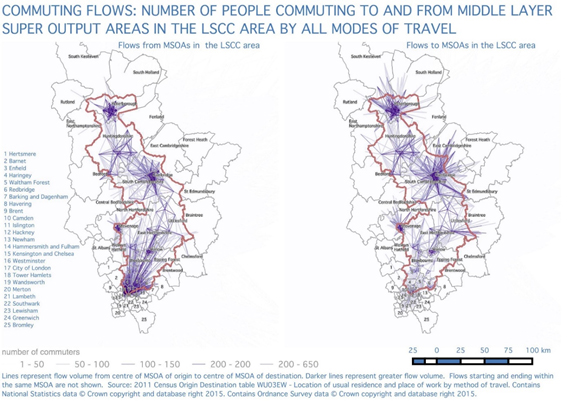 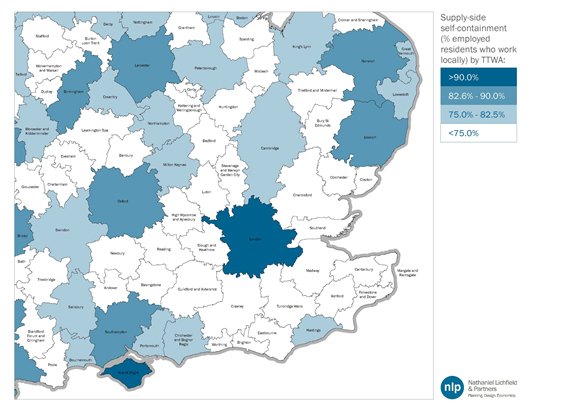 From the global success of London to the World-class clusters of Cambridge, we have significant opportunities for growth in between in places such as Stevenage and Harlow. Local areas in the Corridor have the appetite and capability for growth that will enhance and maintain the UK’s global competitiveness. The Corridor has the potential for further growth and prosperity if we prioritise building on the strong economic links that are here.

Professor Michael Enright, from the University of Hong Kong providing independent advice to the commission concluded that:

The London-Stansted-Cambridge Corridor is one of the key high growth opportunity areas for the UK and I am delighted to be working with the commission. With a vision and plan to invest in a high quality business location capable of attracting global talent, the corridor will be poised to become a pre-eminent regional economy – both nationally and internationally.

The Growth Commission has been established by the Board of The London Stansted Cambridge Consortium (LSCC) – a partnership of public and private organisations based along the fast-growing economic corridor between London and Cambridge. A world leader in high tech and bioscience, the corridor accounts for 20% of England’s digital economy and life science workers.

The Commission will draws upon the expertise of highly regarded experts including internationally renowned economist, Professor Michael Enright, to strengthen the case for investment to support smart, high quality growth playing a significant role in the UK’s future economy.

Research published by the Growth Commission illustrated the economic robustness of the LSCC region compared to the UK average:

On 08 March the Commission published its report looking at what the Corridor can learn from The Triangle, North Carolina, USA, which in 50 years has become one of the world’s leading technology regions.

The Commission also published a comprehensive economic review in January 2016.

With 303,000 jobs in knowledge-based industries, the London-Stansted-Cambridge Corridor is a leading knowledge economy with significant tech industries and firms, and high rates of innovation. Jobs in knowledge-based industries increased by 18 per cent over the five years to 2014, a higher rate of growth than nationally (10 per cent). Rates of patenting are high, and the LSCC area recorded an average of 12.1 patents per 100,000 residents per year over the 10 years from 2002 to 2011 (UK=9.6). Patenting in Cambridgeshire is particularly high with an average of 60.5 patents per 100,000 residents per year.

Science, research, engineering and technology professionals form a high proportion (6.9 per cent) of the workforce (England = 5.8 per cent).

There are 635 life sciences businesses in the Corridor, accounting for 24,700 jobs, and contributing 11% of all national (England) employment in this sector. The Corridor’s success is built on 37 research institutes with global renown in the life sciences sector. There are notable firms throughout the corridor, from Amgen and Astrazeneca in Cambridge, GlaxoSmithkline in Stevenage, and Public Health England in Harlow.

Two of the most significant public investments in life sciences research in the UK in the past 50 years have been made in the Corridor – the £700m Francis Crick Institute (an interdisciplinary medical research institute) in London, and the new £212m MRC Laboratory for Molecular Biology (LMB) in Cambridge.

There are 91,000 IT and telecommunications professionals and technicians in the LSCC area (12.8 per cent of the total for England), and 12,400 businesses in the ICT and digital sector (8.1 per cent of the England total).

Tech City in London is home to one of the largest concentrations of small, fast-growing digital technology companies in Europe including Last.fm (sold to CBS in 2007 for $280 million); Tweetdeck (sold to Twitter in 2011 for $40 million); Songkick (the largest global database of concerts in the world); Dopplr (sold to Nokia for $22million); and Yammer (the leading enterprise social network made Tech City its European headquarters in 2011).

There are now 3,000 firms involved in ICT and digital industries in the Cambridge Cluster, including ARM (semiconductor design and global leader in low energy semiconductors for mobile devices), Cambridge Display Technologies (OLED displays), AVEVA, Autonomy Corporation and Cambridge Silicon Radio. Specialisms include computer gaming (firms such as Frontier Developments and Jagex Games Studio), as well as innovative tech firms such as Owlstone (gas sensors on microchips), and RealVNC (remote control of computing and smartphone devices).