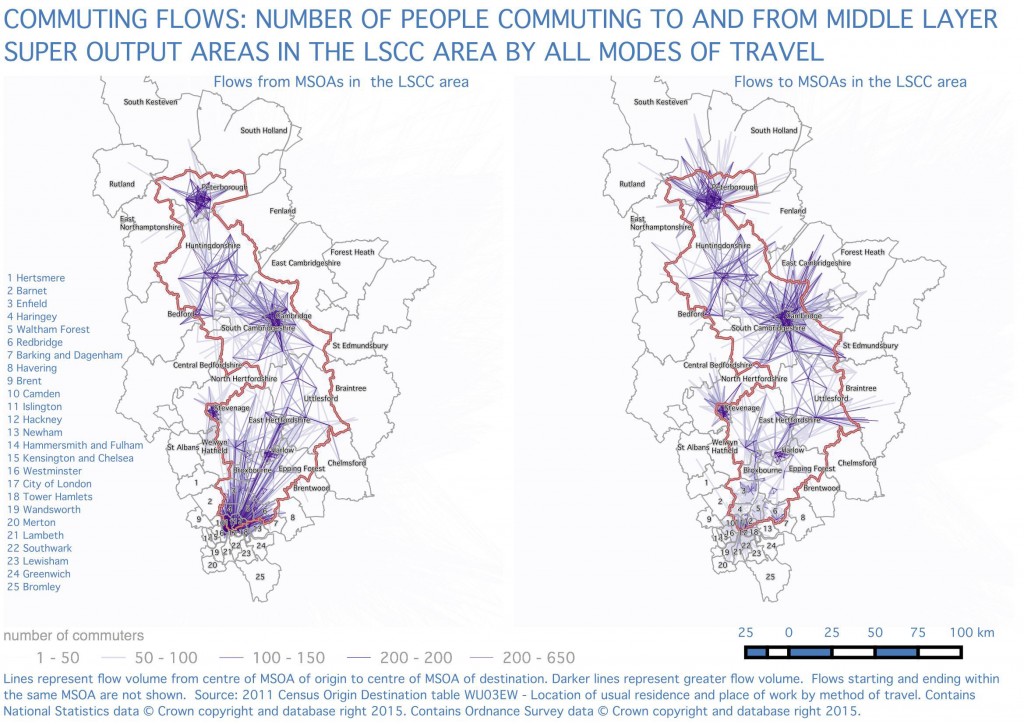 A report was released today that presents an analysis of the London-Stansted-Cambridge Corridor economy, and the characteristics and performance of the local areas that constitute the Corridor. The report reveals that the LSC Corridor is a region of dynamic growth with an increasing global presence. This article summarises the main findings.

We will discuss the implications and meanings of this analysis in our first Inquiry Event on January 21.

The Corridor provides a national innovation and knowledge hub, driving UK growth and economic dynamism. There is persuasive evidence that the London-Stansted-Cambridge Corridor economy is a significant contributor to UK economic growth and jobs, has grown at a higher rate than nationally, is strongly entrepreneurial and is a major location for knowledge-based jobs and innovation.

Growth rates which have raced ahead of the national average

Rates of economic growth are high, particularly in high value-added, knowledge-based employment. The corridor has a significant and growing presence in high value-added activities which tend to be internationally tradeable, with skills and businesses with a global footprint.

Overall economic performance has been outstanding, but this is not uniform within the corridor

The economy between Cambridge and London needs a boost. While the economy of the Corridor as a whole has performed well above the national average, this performance is being driven by exceptional growth rates in Cambridge and London in the face of slower rates of growth in Essex and Hertfordshire. The map below shows recent annual rates of economic growth in England and Wales. 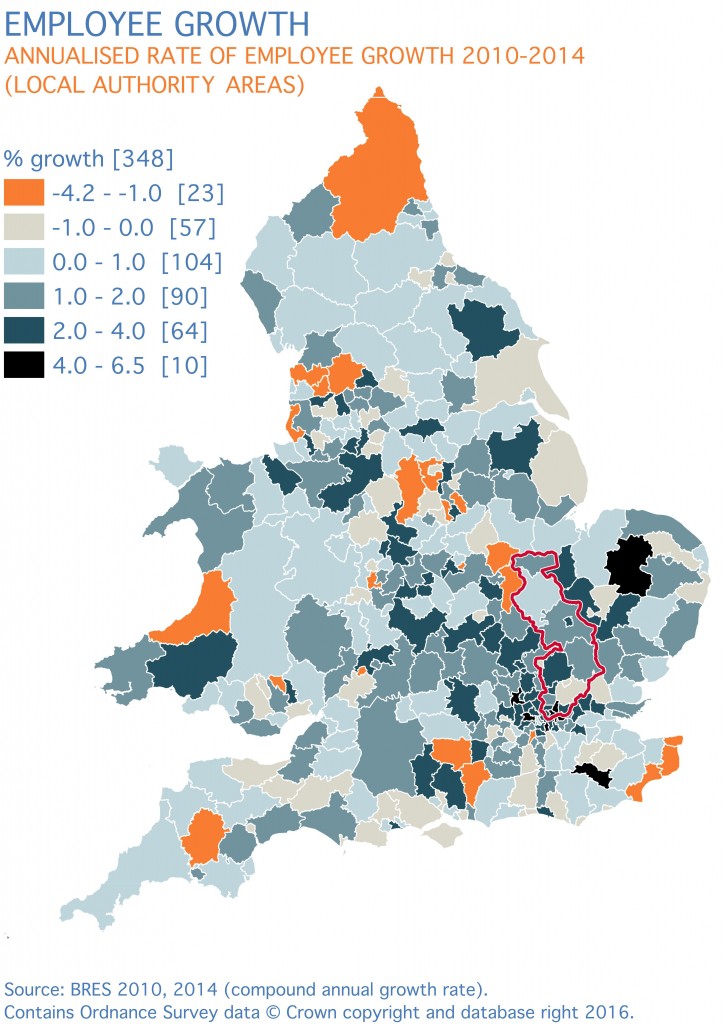 The concept of an ‘ideas corridor’ is supported by the evidence and knowledge of the business base, but this is also a successful location for a broad range of private sector services

Knowledge and tech is a major strength, but it is complemented by high growth across all private service sector activities. The corridor is notable for the very significant presence of knowledge-based jobs and economic output, but this is part of a bigger picture. Private sector services are growing strongly, contributing a larger share to economic output than in the rest of the UK.

There has been major jobs growth in North London and Broxbourne. This has been driven by professional and administrative services and science, technology and ICT industries.

Racing ahead of the UK: the Corridor is outstripping the rest of the country as a major entrepreneurial, knowledge based, high value economy

The Corridor is very entrepreneurial, with a large and growing business base. There are significant levels of employment and specialisms in high-value, knowledge-based activities. These are growing at a much faster rate than nationally and are driving demand for highly skilled jobs.

High rates of innovation in the Corridor reflect the strong presence of knowledge-based industries, high-technology manufacturing and R&D activities.

Although it generates a high number of skilled jobs and attracts much higher levels of overseas workers than other areas, the corridor’s economy is a net exporter of skilled labour (predominantly to London)

The southern parts of the corridor in London, Essex, and North London have high rates of commuting to central London. In total, 360,200 LSC residents commute to the ‘rest of London’ (i.e. not including North London, which is part of the LSC corridor). Of these, 139,900 LSC Corridor residents commuted to Westminster and the City of London alone.

The LSC Corridor’s main urban and employment centres tend to employ more highly skilled workers than reside there (due to the higher concentrations of skilled jobs there). They also show that the skills of residents are higher than those of workers in many parts of the North London boroughs – presumably as many of the highly skilled residents work in Central London.

The Corridor is home to a large and increasing workforce of overseas nationals. On average, there are 36 National Insurance (NINo) registrations per 1,000 people working in the area – more than double the UK average of 15.

However, the Corridor has above-average levels of skills shortages, demonstrating an imbalance between the demand for labour and firms’ ability to attract the necessary staff or skills.

In some districts with significant employment land, qualification attainments are notably low

Within the Corridor, qualification rates at level VQ4 or above (degree level or above) were highest in Cambridge, where 61.3 per cent of working-age residents were qualified to level VQ4 or above, and Islington (58.9 per cent) but below average in Broxbourne, Epping Forest, Harlow, Peterborough, Stevenage and Uttlesford. A number of districts with significant vacant employment sites awaiting development or occupation (such as Broxbourne, Enfield, Harlow, and Stevenage) have much lower attainment rates than the national average, posing the risk of future skills shortages or unfulfilled investment potential.

Despite high rates of GVA and jobs growth, and a bright economic future, a significant share of people living in the Corridor do not benefit

Economic participation varies significantly between localities. North London in particular has higher rates of inactivity and unemployment. Access to jobs is a significant issue for young people across the Corridor and for Black and Black British males. Income deprivation, child poverty and child income.

Housing pressures are a significant feature of the corridor

Housing costs are well above the national average in all housing sectors – home ownership, private renting and social housing. In 2014, Islington, Hackney, Haringey, Cambridge and Epping Forest ranked within the most expensive 10 per cent of 326 local authority areas in terms of average house prices. The areas with the most expensive owner occupied housing also have the highest private rents.

Housing sales and completions remain below pre-recession levels in many parts of the Corridor. Although the LSC Corridor has experienced rapid growth in its dwelling stock, driven by growth in private sector housing, the housing market is still suffering from the effects of recession. While house prices in all areas have risen above their pre-recession peaks, sales remain lower than before the recession, particularly in Enfield, Peterborough and Harlow. Housebuilding has also been affected. Between 2006/07 and 2010/11 net additions to the housing stock fell sharply and have since plateaued with no signs of recovery.

Road congestion is a problem, but the propensity to commute by public transport and cycling is much higher in the corridor

Most people travel to work by car or van in the Corridor, but there is also a higher level of commuting by public transport or bicycle than nationally. Road congestion is higher than average in the Corridor’s London Boroughs, and since 2008 it has increased above national rates across most of the Corridor.